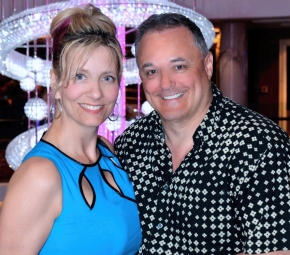 Rene DeFazio and Tamara Veitch are a husband and wife writing team. The co-authors have been writing together for a decade. In 2012 they received Honorable mentions from the New York Book Festival and The London Book Festival. In 2014 they were each awarded an Empowered Writers Award at the World International Peace Festival.

Rene DeFazio was born and raised in Canada and currently resides in the Vancouver area. Rene is an actor and producer with numerous film and television roles to his credit. A world traveler and lifelong adventurer, Rene has called upon his unusual and exciting experiences in co-creating The One Great Year Series. His tireless research and first hand knowledge of exotic locations, customs, sights, and scents help to bring this epic story to life.

Tamara Veitch is a writer, mural artist, and mother of three. She grew up in Canada and attended Simon Fraser University, studying English, Psychology, History and General Arts. Tamara has had a lifelong interest in spiritual wisdom and has carefully researched ancient teachings from many traditions to ensure historical accuracy throughout The One Great Year Series.

Tamara and Rene have completed The Emissary Book I and The Emerald Tablet Book II in The One Great Year Series and are currently working on Book III The Ancient Book of Changes. The couple have recently completed the narration of The Emissary audiobook. To maintain a dynamic and authentic presentation of the ancient secrets at the core of their writing, they travel to exotic locations in search of esoteric knowledge and cultural insights that will inspire readers everywhere.