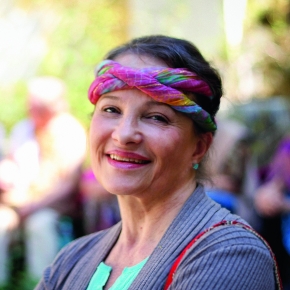 Robes of Silk, Feet of Clay

Judith Bourque was born and raised in the United States. She is an award winning filmmaker and holistic therapist. After graduating from Massachusetts College of Art with a Bachelor’s Degree in Fine Arts, she went to India to become a teacher of Transcendental Meditation, and then worked within the TM Movement’s inner circle for two years. She subsequently trained as a teacher of Re-evaluation Counseling, introducing that method to her country of residence, Sweden.

She is an international workshop leader teaching classes in Meditation, Dreams as a Source of Spiritual Guidance, Shamanic Healing and Group Dynamics. After post graduate studies at the Stockholm Academy of Dramatic Arts, she worked at Swedish Television for many years as a film editor, as well as producing and directing independent documentaries. Her films include the Sowing for Need, or Sowing for Greed? a documentary on genetically modified seeds, The Real Patch Adams, and Hot and Cold Mandala, an experiential infrared film. Robes of Silk, Feet of Clay is her first book, and the winner of the 2019 Society of Voice Arts and Sciences Award for Best Author Voiceover Performance.